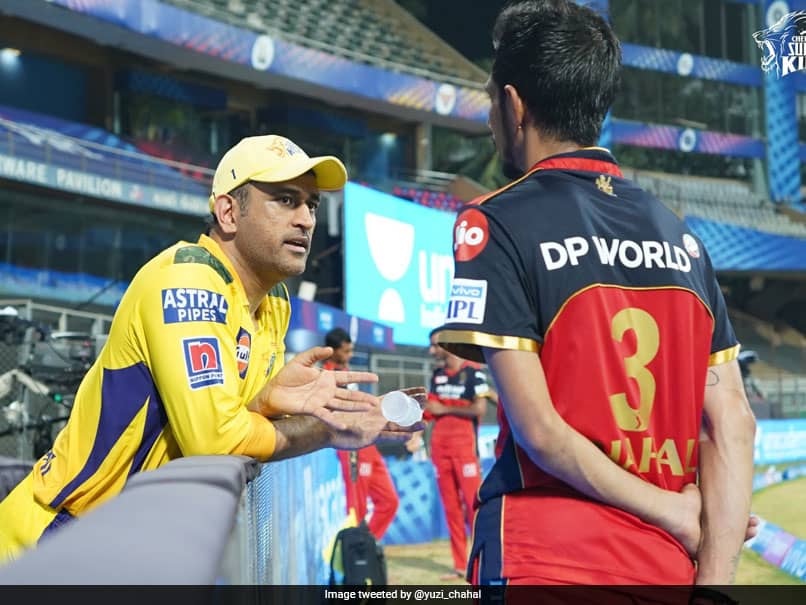 
The Indian Premier League (IPL) sees some high-octane action between the best in the business, but also puts on display the camaraderie and friendship between players from different sides. Royal Challengers Bangalore (RCB) may have lost to Chennai Super Kings (CSK) on Sunday, but that did not stop their players from catching up after the game. RCB spinner Yuzvendra Chahal on Monday took to social media to share a picture with MS Dhoni, with who he played for India. “The best moment is reunite,” the wily leg-spinner captioned the picture, adding a hug emoji.

The best moment is reunite pic.twitter.com/NqujnolXk6

In the picture, the two can be seen having a chat just outside the boundary ropes.

CSK also shared pictures of players from both the teams catching up.

“The love for the game is always the winner,” they captioned the picture.

The love for the game is always the winner.

They also shared a picture of the two captains catching up.

The match at the Wankhede between CSK and RCB was dominated by one man – Ravindra Jadeja. He smashed Harshal Patel for 37 runs in the final over of CSK’s inning, with 36 of those coming off his bat and one no ball. He finished with 62 off 28 deliveries.

Jadeja then finished any hopes of a revival for RCB as he took three wickets, including their middle order mainstays Glenn Maxwell and AB de Villiers.

If that was not enough, he was also on target with a direct hit to run Dan Christian out.

CSK will next take on SunRisers Hyderabad in Delhi, while RCB face Delhi Capitals in Ahmedabad in their next assignment.