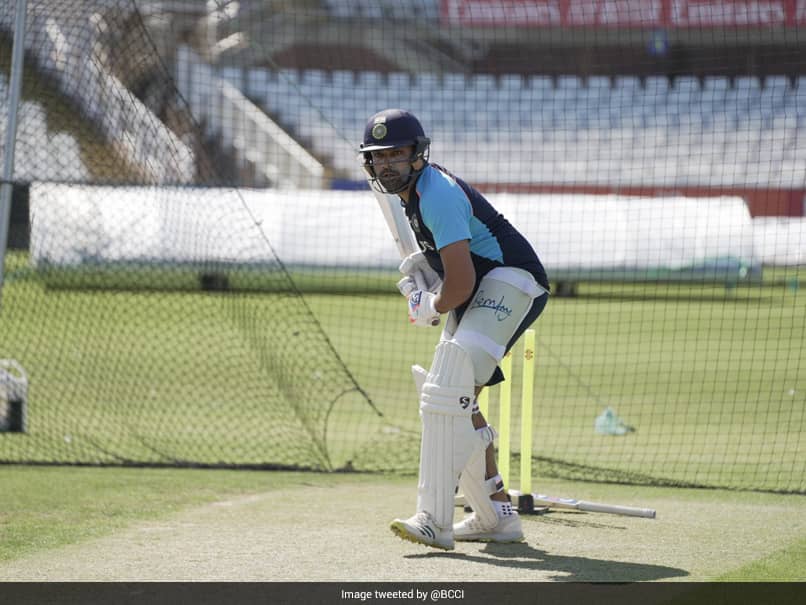 ENG vs IND: Rohit Sharma practices during a training session in Durham.© Twitter


Rohit Sharma took to social media to update fans about his training ahead of India’s upcoming five-match Test series against England. The opening batsman is currently in Durham gearing up for the visitors’ upcoming friendly warm-up match against County Select XI, starting from July 20. Also, the Test series against England begins from August 4, with the first match to be held at Trent Bridge. Posting two photos on Twitter, Rohit Sharma captioned it in Hindi, which translates to, “Bat in hand, and when the ball meets the middle of the bat. It feels different”.

In the photos, the Mumbai Indians (MI) skipper can be seen practising batting during a net session.

The post was well-received by fans, with many wishing him luck for the upcoming fixtures.

Earlier, Virat Kohli also posted two training photos on social media, which he captioned as, “When you absolutely love what you do, everything just flows”.

The Board of Control for Cricket in India (BCCI) also posted snippets from Team India’s training session in Durham as players geared up for the five-match Test series.

Here are the pictures:

The visitors have already faced a huge setback, with wicketkeeper-batsman Rishabh Pant having tested positive for coronavirus. He hasn’t travelled with the rest of the squad to Durham.

The upcoming series against England will be important for India, considering their recent defeat to New Zealand in the World Test Championship (WTC) Final. The Kane Williamson-led side won by eight wickets at The Ageas Bowl.

Upcoming Emoji 14.0 Update: Here’s a list of emojis that may come to your smartphone soon

Sri Lanka vs India: If Virat Kohli, Ravi Shastri Have A Player In Mind For T20 World Cup, We Will Check Them Out, Says Shikhar Dhawan