While India is experiencing a horrific second wave of the pandemic leaving several lakhs of people dead and millions infected, in Maharashtra’s Ahmednagar district has become covid free. This is all thanks to the Padma Shri Popatrao Pawar, who has been the Up-Sarpanch of the village since 1990.

Impressed by Pawar’s model of slaying the virus, the Collector and Special Executive Officer () of Ahmednagar district called him to guide around 1,300 village heads on how to become covid-free in their respective villages.

Talking about how he went about controlling the spread of the virus, says, “In March, one of the villagers had covid symptoms. He was immediately quarantined in a nearby training school, as were all the people who came in contact with him. While we waited for the RT-PCR results, we administered Rapid Antigen Tests for quick results.”

This is not the first time Pawar has demonstrated his vision for the benefit of the village. He has been widely recognised for his work on water harvesting, water conservation and transforming a drought-prone area into a lush green village.

“We had 52 covid cases at one time between March and April. After they tested positive, we immediately started treating them with a doctor’s help. Four of them required ventilators so they were shifted to a hospital. Unfortunately, we lost one of our men. However today we are covid free,” says Pawar, proudly.

The villagers strictly follow covid appropriate behaviour. Besides following social distancing, every house uses the sanitiser supplied by the , uses masks and four teams keep a tab on the markets to see that covid guidelines are followed.

“Our main crops are onion, potato and seasonal vegetables. However, villagers are not allowed to grow sugarcane, grapes or even pomegranate as they require huge amounts of water and the village has been focusing on conserving its groundwater level,” said Pawar.

“Due to onion production, several labourers from Marathwada and Konkan keep on coming to our village for work. We have asked them to stay on the farms in sheds and the villagers have been asked to maintain distance while working with them in the fields,” said Pawar.

Every week teams of gram panchayat staff and volunteers check the villagers’ oxygen saturation and temperature. Those from Hiware Bazar who go to other villages are advised to sanitise upon return and isolate themselves from their families.

“This has worked for us because our villagers have cooperated with us. Till now we have vaccinated around 200 senior citizens in our small village that has a population of 1,600,” said Prasanna Pawar, son of Popatrao Pawar. 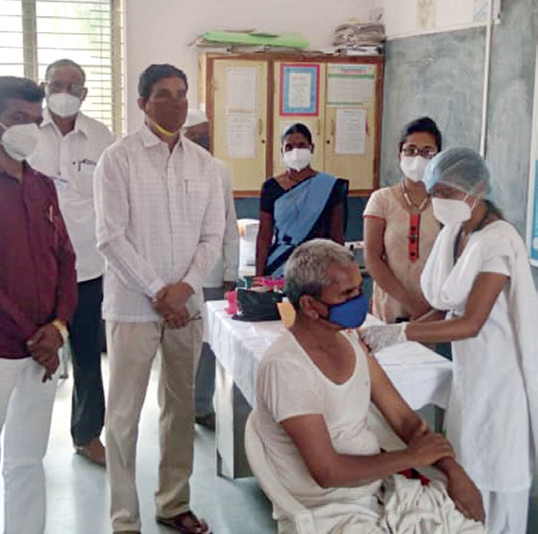 Since Pawar took over as the sarpanch in 1990 after completing his post-graduation, Hiware Bazar has built several dams, percolation tanks and bunds. “The villagers have always supported my efforts since 1990,” said Pawar who has been elected continuously since then.

The villagers have not only planted trees but built dams, focused on family planning, laying underground drainage pipeline, clean water, street-lights and banned open defecation. “We’ve had reverse migration from Mumbai and as people’s incomes went up with more and more land getting access to water,” said Pawar who has been unopposed as the leader of the village and even conferred with a Padma Shri for his efforts.

Appreciating Hiware Bazar’s efforts, Rajendra Kshirsagar, chief executive officer, , Ahmednagar, said, “They made sure that all the guidelines given by government and health officials were duly followed to become a successful model with zero cases. In rural areas, a lot of people use handkerchieves instead of masks.

But here, the village leaders made sure everybody uses masks, follows social distancing and most importantly, ensured that they isolated the person and his contacts while waiting for the test reports to stop further spread of the virus,” said Kshirsagar.

A separation: How the pandemic is impacting the mental health of aged parents and their children settled abroad | Kolkata News

Bhiwandi: Cook arrested for killing 8-year-old child who exposed his relationship with his mother to father | Thane News

A separation: How the pandemic is impacting the mental health of aged parents and their children settled abroad | Kolkata News

Bhiwandi: Cook arrested for killing 8-year-old child who exposed his relationship with his mother to father | Thane News

29 missing; 8 dead in Karnataka; parts of Goa without power, may need 2 days to restore it | India News