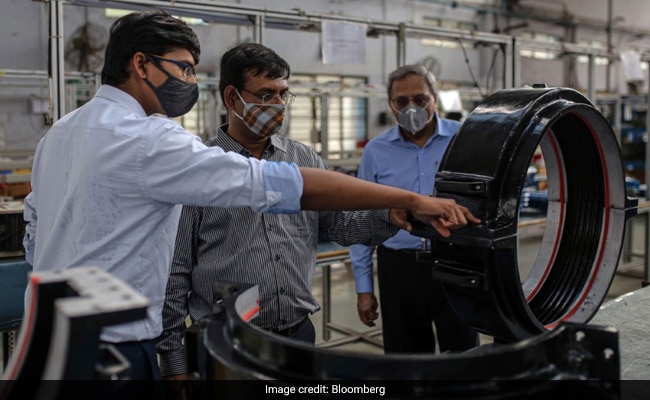 The company’s other clients include Power Grid Corp. and the Tata Group.

As India gets battered by Covid-19, keeping many away from their workplaces, one segment of its energy market is flourishing by cutting out labor-intensive tasks at some of the world’s biggest refining complexes.

When the virus pummeled the South Asian nation, operators of refineries and power generators were forced to postpone routine maintenance in order to avoid infections among the hundreds of technicians, engineers, and general workers typically hired for such tasks. As they sought alternatives, some turned to technology and automation to bridge the gap.

For Tarun Kumar Mishra, co-founder of Detect Technologies Pvt. Ltd., it was the perfect opportunity for his product: a real-time pipeline monitoring system that tracks leaks and corrosion using sensors and artificial intelligence. In 2014, tycoon Mukesh Ambani’s Reliance Industries Ltd. made a rare $100,000 investment in Mishra, which helped fund the initiative.

“Technology adoption increased substantially,” Mishra said. “The Covid-19 outbreak forced everyone to break the inertia of working with a certain process that’s been in place for 50 to 60 years. They either had to shut down the plant or try a new way.”

With the funds, the 32-year-old Mishra said he roped in students who joined him with only food as an incentive. The company has since built another product utilizing drones programmed to inspect sites and equipment including refineries, power plants and reactors.

The startup then won a contract from Royal Dutch Shell Plc in 2019 to monitor a petrochemicals plant in Pennsylvania and now counts companies including Reliance and Bharat Petroleum Corp. in India, as well as global energy majors such as Exxon Mobil Corp. as customers.

“We are benefiting from their drone-based monitoring of our plants and inspection of our tanks,” said Arun Kumar Singh, director of marketing and refineries at Bharat Petroleum. “That’s become all the more relevant right now as we are operating with a lesser number of people to avoid exposure.”

Detect is also working with Adani Transmission Ltd., which supplies electricity to India’s financial hub of Mumbai, to avoid a repeat of a grid collapse last year that contributed to its worst blackout in decades. The company’s other clients include Power Grid Corp. and the Tata Group.

–With assistance from Kevin Dharmawan, Serene Cheong and Andrew Janes.

Twitter Mistakenly Verifies Fake Accounts, Suspends Them After Being Calling Out