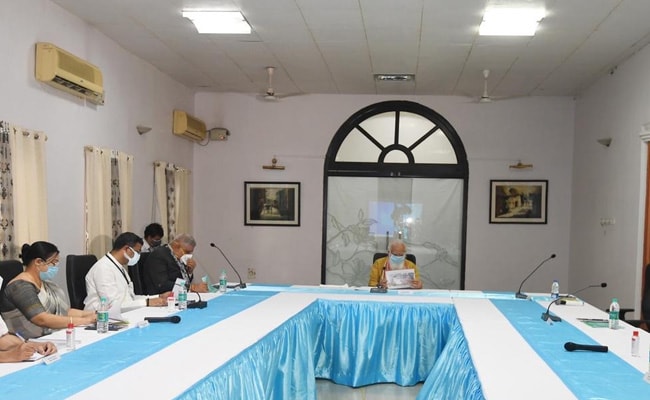 Mamata Banerjee has given “entirely false statements” and “boycotted” a meeting with Prime Minister Narendra Modi on Friday after agreeing to attend it, the centre said today in its second rebuttal to the Bengal Chief Minister’s allegations.

In a nine-point rejoinder, government sources tore into Mamata Banerjee’s account of the Friday incident.

Mamata Banerjee and her team had skipped the meeting with PM Modi to review the impact of Cyclone Yaas in Bengal and left after a brief interaction with the Prime Minister, setting up a mega clash.

To her claim about being informed belatedly about the Prime Minister’s schedule, the sources said a meeting to assess cyclone damage could not be finalised “before the cyclone comes”.

Ms Banerjee has repeatedly alleged that she waited to meet the PM. Government sources countered that with time details.

After her chopper landed, she reached the building where the meeting was to take place, around 500 metres away. “After meeting the PM, she departed for her next journey at 2.35 pm. So in effect, she travelled 500 metres to and fro, met PM and departed in 25 minutes. She left before the PM left, which is clearly contrary to accepted practices and protocol. It is clear that Mamata Banerjee’s statement of being made to wait is entirely false and that she made the PM wait,” government sources said.

The sources also said Mamata Banerjee had agreed to attend the PM’s review but had changed her mind after learning that her former aide-turned- BJP MLA Suvendu Adhikari, who is the state’s Leader of Opposition, would be in the meeting.

“Mamata Banerjee chose to boycott the review meeting because the LOP of WB was present. No issue was created by government on this, because what mattered was Cyclone relief activities. It was suggested to her that PM will meet her immediately after the review meeting as that was the reason for which he traveled to West Bengal. Sensing that she may have to wait till the review meeting gets over, she chose to prevent other officers too from attending the meeting and in effect cancelled the review meeting scheduled by the Prime Minister,” the sources said.

On Ms Banerjee saying she had to wait for 20 minutes and her chopper had to hover because the PM’s chopper was to land, the sources said she should have come in advance, “as everyone does when PM is supposed to land at any airport”.

The Centre also defends its moves against Alapan Bandyopadhyay, then Chief Secretary of Bengal, who was ordered to report to Delhi after the meeting controversy.

“The order is perfectly constitutional since Chief Secretary is an All India Services officer. He chose to ignore his constitutional duties, as a result of which no presentation was given to PM and no officer of the West Bengal government attended the PM’s review meeting,” sources said.
Mr Bandyopadhyay, instead of going to Delhi, retired yesterday and was immediately appointed Chief Adviser to the Chief Minister.

Government sources said his retirement showed that Mamata Banerjee was on the backfoot. “She knows that facts of the matter are against the Chief Secretary and his behaviour was such that it will invite strict disciplinary action…All India officers are not expected to be part of politics. Mamata knows all this and his retirement is a last bid to save him,” they said.

Ms Banerjee’s objection to Suvendu Adhikari’s presence was also dismissed by the Centre, which said, “There have been numerous meetings in the past in non-BJP ruled states where representatives of other parties have been present”.

Reliance Jio working with SEGA to bring Sonic the Hedgehog 2, Streets of Rage 3 to its platform