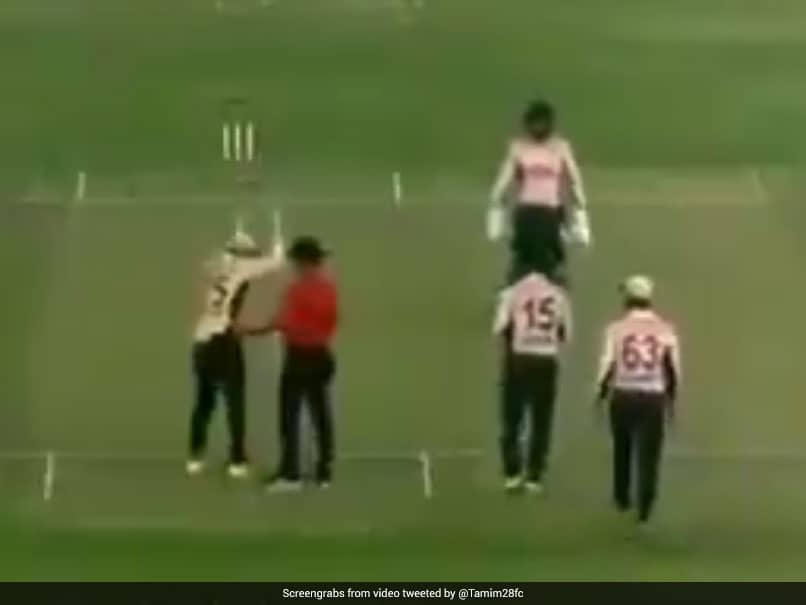 Shakib Al Hasan flung the stumps to the ground in anger after being displeased at the umpire.© Twitter


Bangladesh star all-rounder Shakib Al Hasan is known to provide moments of brilliance with both bat and ball, on the field. However, in a match in the Dhaka League – a domestic Bangladesh T20 tournament – Shakib came up with two moments of utter madness as he lost his cool at the umpire twice in the space of two overs. Playing for Mohammedan Sporting Club against Abahani Limited, Shakib once kicked the stumps after a leg-before appeal was turned down and then an over later, protesting against the umpire calling off play due to rain, he uprooted the stumps and smashed them on the ground.

Watch his reaction to the LBW appeal turned down here:

Is it Shakib al Hasan? pic.twitter.com/kk69rdyyod

The second incident came when the umpire called off play due to rain with 5.5 overs of the innings bowled. D/L methord would have come into play had 6 overs been bowled, and Shakib was allegedly miffed by the umpire not allowing another delivery before delaying the match.

Dls method would have come to play after 6 overs! That’s why Shakib was frustrated to bowl another ball. And also umpire gave not out to a plumb LBW!

Maybe Shakib sensed something fishy! Because fixing is nothing new in DPL#DPLT20 #DPL #ShakibAlHasan #Abahani pic.twitter.com/viCzCUTKHl

Shakib is seen animatedly rushing to the umpire before taking the stumps off the ground and throwing them on the ground in anger.

In the match, being played at the Sher-e-Bangla National Stadium, Mohammedan Sporting scored 145/6. Shakib, their captain, top-scored with 37 off 27 deliveries.

When play resumed, D/L was used and Abahani needed to get to a target of 76 in nine overs. However, they finished with only 44/6 and Mohammedan won the match by 31 runs.