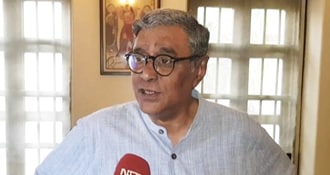 Former journalist Swapan Dasgupta, who quit his Rajya Sabha seat to contest in the Bengal assembly polls as part of the BJP and lost, was renominated today to the seat he vacated. The government made the re-nomination today in what the Congress said was a “first”.

A Home Ministry notification this evening read: “In exercise of the powers conferred by sub-clause (a) of clause (1) of article 80 of the Constitution of India, read with clause (3) of that article, the President is pleased to renominate Shri Swapan Dasgupta to the Council of States to fill the seat which has fallen vacant due to his resignation for his reminder term viz – 24-04-2022”.

The President nominates renowned personalities to the Upper House on the advice of the government. The nominated members are drawn from fields such as literature, science, sports, art and social service.

Senior Congress leader and former Union minister Jairam Ramesh tweeted: “I think this is the FIRST time since the Rajya Sabha came into being in 1952 that such a thing has happened.”

I think this is the FIRST time since the Rajya Sabha came into being in 1952 that such a thing has happened. https://t.co/7Hgfzqycat

Mr Dasgupta had contested from Bengal’s Tarakeswar – a Trinamool Congress stronghold — on a BJP ticket in the recently concluded assembly polls. But he was among the large number of BJP candidates who had to bite the dust as Mamata Banerjee retained power with a majority bigger than even 2016.

The former journalist had been among the MPs drawn into the battle for Bengal as the BJP scoured for credible faces for the urban voters.