NEW DELHI: A pandemic year that confined students to their homes, with the classroom going online, had stoked anxiety and fear. The Class XII students, poised to embrace college life, were on tenterhooks. It turns out that all those fears were misplaced. The results announced by Central Board of Secondary Education (CBSE) on Friday revealed that virtually everyone was a winner with few feeling disappointed.

The Class XII examinations had been cancelled because of Covid-19 and the CBSE had adopted an alternative method of assessment. The outcome: the results are at a new high. The pass percentage is at 99.37%, up from 88.78% last year, while schools under Kendriya Vidyalaya Sangathan and Central Tibetan School Administration have scored 100%! 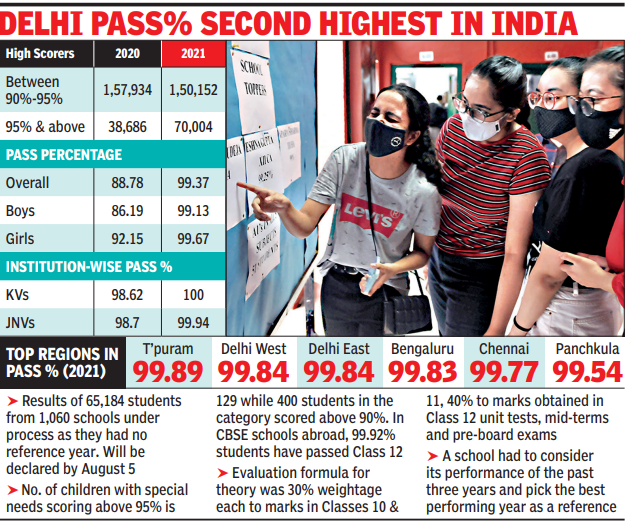 The fear among students that inclusion of the Class XI marks in working out their final scores would be a drag on their performance seemed to have been unfounded. This year the number of students scoring 95% and above is 70,004, up from 38,686 last year. College principals are saying that higher cut-offs are inevitable. The students in this bracket constitute about 5.37% of the total number.

There are chances of these numbers going up as the results of 1,060 new schools, which have around 65,184 students, are yet to be declared. The board said that these are mostly new schools which do not have reference years and the board was working out their results in the “interest of students”.

Under the new assessment policy, a school had to consider its performance of the past three years and pick the best performing year as a reference. The subject-wise marks of individual students could be within +5/-5 of the reference year and the overall average marks of the school could not be more than 2 marks of the reference year. This was a policy devised by the board to check inflation of marks by schools. The marks were calculated based on a 30% weightage to the theory component of the Class X board results, 30% weightage to Class XI marks and 40% weightage to Class XII marks in unit term/mid-term/pre-boards. The result committee at each school could decide on the component for the Class XII weightage.

For instance, The Indian School assessed the Class XII performance of each student individually. The best score of a student in any Class XII test was given weightage. “The students are happy as most of them have scored more than what they had expected,” said principal Tania Joshi.

A commerce student of Bluebells School International, Darshan Ram, who scored 98.25% in the best-of-four calculation, said, “I was expecting less than what I have received. From a personal point of view, I was super-elated. However, when I compared it with students from mine as well as other schools, it became clear that a lot of us are now in the same bucket. The cut-offs will soar and might become a challenge,” said Ram.

Educationist Ameeta Mulla Wattal attributed the increase to different moderation levels and the opportunity given to students to improve scores. “There has been so much stress and anxiety. This this was the best CBSE could do to give the children a sense of achievement. There were so many moderation levels, so many chances given at different levels, the fact that the children’s best scores were looked at. This was the best way for the students to be encouraged in this situation of anxiety and stress,” said Wattal.

With the overall pass percentage being at an all-time high, CBSE officials say this year fewer students were placed in the compartment category. “The schools have passed many borderline cases. Students who would have failed to qualify by a few marks in one or two subjects have been granted grace marks,” said an official.

Among the regions, this year once again, Trivandrum has the best pass percentage at 99.89%, followed by Delhi with 99.84%. From the fourth position last year, Delhi has now moved to the second.

Since the board did not conduct the Class XII exams, it did not release a merit list. This year the board will release a combined mark sheet-cum-pass certificate for the students.